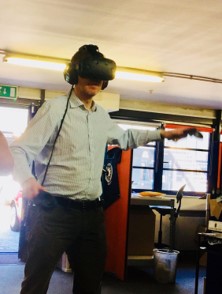 I am a Senior Lecturer in Health Informatics at UCL with a background in health psychology and statistics. I am one of the co-investigators on the V-Engage project.

I played way too much Tetris as an undergraduate. There was then a long Heroes of Might & Magic phase. Doom dominated my year doing an MSc. Lots of GoldenEye followed. My first experience of exergaming was the PS2 EyeToy. I only broke one light bulb playing that… There’s a Wii Fit account for me on an ex’s Wii somewhere. I spent many hours playing Skyrim, but now I think the game I play most is Solitaire.

I am a Research Assistant on the vEngage project. I love health psychology research and have worked in healthcare industry as a medical copywriter and the NHS before joining the UCL research departments. As a kid I used to play outdoors and was particularly good at “Gumi-twist” as we called it, or “Elastics” reaching highest complexity levels. (If you are interested, the game looks like this: https://todiscoverrussia.com/top-25-games-of-schoolchildren-in-the-soviet-union-18-elastics/)

I also loved Tetris (spell check wants to change this to Trieste which is essentially in my country). I also played a few single player adventure video games of which my favourite was Riven, a sequel to Myst.